Have you or others in your office been experiencing more days where an increasing number of tasks are inundating you, and in the attempt to juggle and multitask, you get nothing done? It's like a spinning plate act, where you're frantically attempting to keep a multitude of plates spinning on poles....

The frequency of these days is growing, turning into weeks, then blending into a never-ending cycle of an increasing workload, crippled with increasing blunders, mistakes and confusion.

If this is your world, you’re not alone.

There’s a term for this problem, it’s called Cognitive Overload. In the fast pace of today’s work environment, it’s no longer an unfamiliar issue.

Multitasking used to be a desired quality and a skill worth noting on your resume. But these days, everyone in the workforce has been forced to multitask. The desired quality we look for today is someone who, instead of going in a million different directions, can concentrate on one thing and get it done efficiently and well. Studies have shown that multitasking is not helping, but hurting our brains. It’s killing our concentration, our problem solving and our creativity.

Much research points to multitasking as having negative effects on our brain. Studies conducted by the American Psychological Association (APA), suggest that multitasking undermines our efficiencies, while, according to Forbes, research at Stanford University found, “that people who are regularly bombarded with several streams of electronic information cannot pay attention, recall information, or switch from one job to another as well as those who complete one task at a time.”

Recent research at MIT’s Miller Lab points to our brains suffering the consequences of being thrown multiple tasks on a continuous basis.

“Earl Miller, a neuroscientist at MIT and one of the world experts on divided attention, says that our brains are “not wired to multitask well… When people think they’re multitasking, they’re actually just switching from one task to another very rapidly. And every time they do, there’s a cognitive cost in doing so.”

Miller Laboratory, Neuroscience findings through research show “how limitations in cognitive capacity, (how many thoughts you can think at the same time – very few), may be due to changes in rhythmic coupling between cortical areas.  More specifically, feedback coupling breaks down when capacity is exceeded.”  In simple terms, you have limitations as to how many things you can do successfully at one time.

One suggested solution is to become more regimented and organized. Surely this helps, but it in no way stops the rate of the flow of information and tasks coming at you.

The Circus is Coming to Town

In order for recruiters to be successful they need to be able to perform a balancing, juggling and plate spinning act. 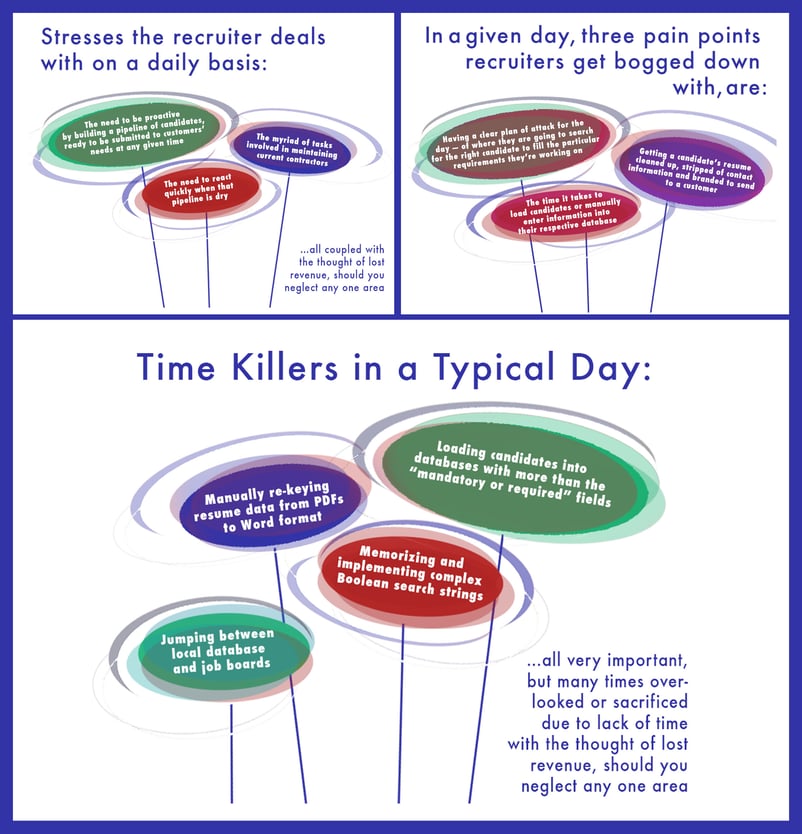 With the whittling down of staff to increase revenue, we are evermore faced with the phenomenon of cognitive overload. We as one person, are now doing what had previously been done by two or three.

With all of the balancing, juggling and spinning of plates, plates are liable to fall. Feelings of inadequacy and failure are part of the complexities of this phenomenon, crippling further performance. It is a vicious circle leading to more disorganization and incompetence – spiraling downward and out of control.

Restoring control in the recruitment industry

In order to restore maximum productivity with minimum wasted effort and expense, the bulk of menial tasks needs to be alleviated. This is where the solution of automation comes in.

The most viable and logical solution is automation, which is readily available for recruiters in the form of intelligent recruitment software.

Realistically, the focus of automation is not to take jobs away, but to make them a bit easier. It is to be used as a tool to help with tasks.

Ultimately, automation in the recruitment process can not only alleviate menial tasks, allowing recruiters more time to be able to concentrate on important duties, but will also free up brain space to be able to complete these duties with much better accuracy and efficiency.